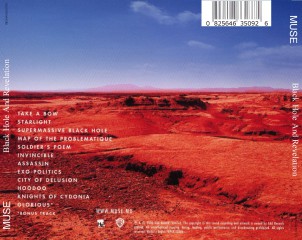 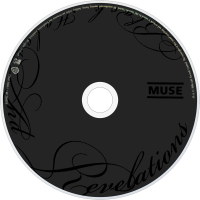 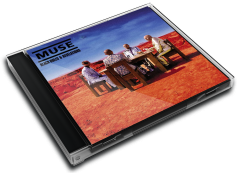 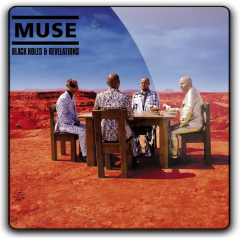 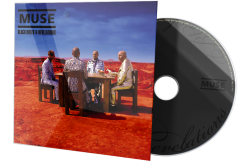 Black Holes and Revelations is the fourth studio album by the English rock band Muse, released on 3 July 2006. Recording was split between New York and France, and it was the first time Muse had taken a more active role in the album's production. The album was a change in style from Muse's previous albums, and the band cited influences that included Depeche Mode, Millionaire, Lightning Bolt, Sly and the Family Stone, and music from southern Italy.
Black Holes and Revelations was placed at #34 in a public vote conducted by Q Magazine for "The Best British Albums of all time" in February 2008.
Like their previous two albums, Black Holes and Revelations has political and science-fiction undertones, with the lyrics covering topics as varied as political corruption, alien invasion, revolution, New World Order conspiracies as well as more conventional love songs. The album gets its name from a lyric in the song "Starlight", "Our hopes and expectations are black holes and revelations".

Album Review
Muse finally shake off those last pesky inhibitions that inhibited 2003's Absolution. Not content with merely mixing classical piano, skin blistering guitars and operatic structures, we now get shimmering synths and what can only be described as prog techno.
Black Holes And Revelations is a superlative stretching album: audacious, inflamed and utterly unashamed of its own ambition. It's also sonically exhilarating.The beats of "Take A Bow" shudder on the speakers as Matt Bellamy wails "You will burn, you will burn" at an un-named world leader, who may well be initialled GWB.
From this modest opening, the album only accelerates and ascends, taking in Muse's most heartfelt love song yet (the gorgeous, expansive "Starlight"), mind blowing mutant space funk ("Supermassive Black Hole") and amphetamine techno-rock ("Assassin"). At times it's the silliest thing you'll ever hear. Often it's the best. Muse just became Britain's most exciting band.