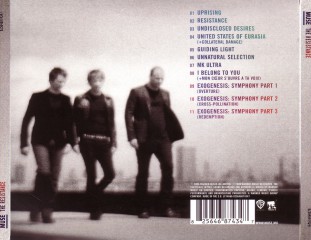 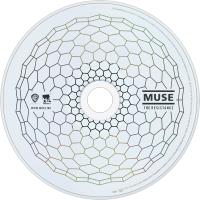 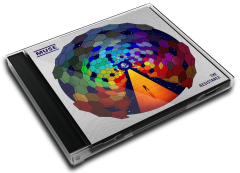 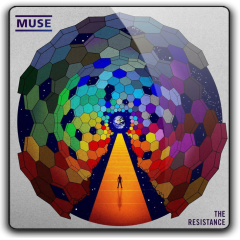 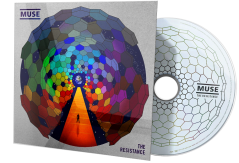 The Resistance is the fifth studio album by English alternative rock band Muse, released in Europe on 14 September 2009, and in North America on 15 September 2009.
On its release, it topped the album charts in 19 countries. It also debuted at number 3 on the Billboard 200 chart, selling 128,000 copies. It also surpassed its predecessor, Black Holes and Revelations, in relative album sales in its debut week in the UK selling approximately 148,000 copies and Worldwide with 479,000 copies sold. Critics were mostly positive about the album, with much of the praise directed towards its ambition and classical music influences. The album was produced by the band and mixed by Mark Stent. The album's first single, "Uprising", was released on 7 September 2009, with the album's second single, "Undisclosed Desires" released on 16 November 2009. "Resistance" was released as the third single from the album on 22 February 2010, and although it failed to match the success of its predecessors, the single reached number one in the UK Rock Chart and became the second Top 40 hit from the album in the UK Singles Chart. Exogenesis: Symphony was released as a limited edition EP in the United States on 17 April 2010. Muse promoted the album by performing the songs in a number of live appearances, including their promotional tour The Resistance Tour. The album yielded the band their first Grammy at the 53rd Grammy Awards for Best Rock Album.

Album Review
Less earnest and self-regarding than Radiohead and less free trade-hippie than Coldplay, Muse know exactly how guilty a pleasure they can be. Stuffing their albums with sing-along pomp and circumstance, their days as sub-prog pariahs have long since passed.
Comparing The Resistance with its 2006 predecessor, Black Holes and Revelations, is never going to be easy. The latter was an audacious leap into the hallowed area where cosmic meets commercial in a way not seen since Dark Side of the Moon. There is a distinct development here, but a self-produced heaping on of classical motifs and Queen-style histrionics isn’t necessarily the one we were hoping for. It’s not that they’re taking themselves too seriously, more that you’re never sure if the listener is supposed to.
It all starts splendidly with Uprising. While owing the late Delia Derbyshire some royalties with its Dr Who theme glitter stomp, it shows that Muse know how to whip up proper chart action. Pop sensibilities create a certain tension throughout, although by the closing three-part ‘symphony’, Exogenesis, they’ve jettisoned such relative restraint for string-drenched overkill, albeit laced with incomprehensible semi-sci-fi shenanigans. Still, this final folly/masterstroke works well because, despite its grand designs, it has a touch of ELO magic about it.
And speaking of grand designs, The Resistance retains Bellamy’s preposterous adherence to conspiracy theories ”“ it’s maybe this that stops it being a solid gold classic. The mismatch between a rapidly maturing musical vision and chunks of John Perkins’s Confessions of an Economic Hitman puts Muse firmly back in the X File marked ‘life’s not fair and someone’s to blame’.
Having said that, quoting Chopin or Saint-SaÃ«ns verbatim isn’t necessarily maturation either, but time and again Muse remind you of how good they are at making your pulse race. MK Ultra is a coruscating live favourite-in-waiting, while I Belong to You has enough 70s piano-driven bounce to make you forget all the grim paranoia lying beneath the surface.
At times Bellamy can sound like a rock equivalent of Mulder as he wails “I want the truth!” on the rabble-rousing Unnatural Selection. Someone should tell him that the truth lies in his band’s very capable hands. Muse remain a national treasure, but not one that Nicolas Cage is likely to find.