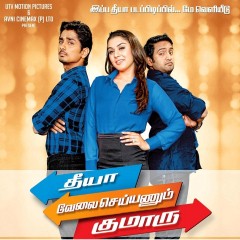 Career:
Coming from a Carnatic background has, no doubt, helped Sathya grasp the techniques of film music composition. A Carnatic singer, he also knows to play the harmonium. This has made it easier for him to master the keyboard, which he has played as well as programmed for several music directors, including Bharadwaj. But, Sathya had to wait long to get his first break. "My first film was Yaen Ippadi Mayakkinai in 2009, which has not yet released. The songs did well in the audio circuit and almost three years later, when the producers of Engeyum Eppodhum heard the compositions, they signed me up". That film was considered a sleeper hit in industry circles and Sathya clearly arrived on the music scene. In quick succession he did Sevarkodi and Ponmalai Pozhudhu.