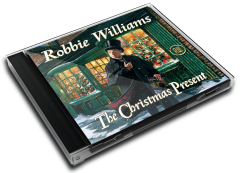 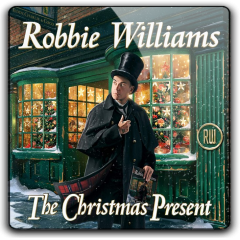 The Christmas Present is the 12th studio album by British singer-songwriter Robbie Williams, and his first studio album since 2016's The Heavy Entertainment Show. It was released on 22 November 2019, and features guest appearances from Tyson Fury, Rod Stewart, Jamie Cullum, Helene Fischer and Bryan Adams. Williams will perform a concert dubbed the "Christmas Party" at the SSE Arena on 16 December 2019 in promotion of the album.

Background
Williams began recording the album in June 2019, just before his residency at the Wynn Las Vegas started, and concluded in Vancouver in October 2019. Williams joked that he was going to call the album Achtung Bublé, in reference to Michael Bublé's "monopoly" on the Christmas music market, which he said "must end now".

The song "Bad Sharon", featuring Tyson Fury on guest vocals, was called a "favourite" to be the UK Christmas number one.

User Album Review
Robbie Williams recently decked the halls of a swish London club with the makings of a grotto that would turn Santa green. Eggnog flowed, mince pies were munched and the tinsel looked alarmingly flammable. The Pope of Stoke was showing off his 12th studio album, ‘The Christmas Present’, for which he had but one ambition: to prise away Michael Bublé’s icy grip on the festive season.

“This album was gonna be called ‘Achtung Bublé’,” Robbie explained. “I fucking love Michael, but it must stop. It must end now.”

So Father Williams has stacked his first Christmas album with no fewer than 28 tracks and a guest list that includes Rod Stewart, Jamie Cullum, German singer Helen Fischer, Bryan Adams and, yes, terrifying boxer Tyson Fury. There are a few lumps of coal here and there, yet this is a generous album that resembles a Christmas dinner with your family: sometimes a bit embarrassing, stodgy in places and you’ll be knackered by the end – but overall a satisfying and fulfilling affair.

Robbie’s sack is stuffed with covers of classics (from ‘Winter Wonderland’ to ‘Let It Snow! Let It Snow! Let It Snow!’) and sparkly new compositions. The tracklist is carved up into two halves, ‘Christmas Past’ and ‘Christmas Future’, though, as with a post-cheese course dream, there are some conceptual inconsistencies. Pop-rock belter ‘Idlewild’, for instance, appears on the second half, yet finds Robbie romanticising his younger, wilder years “in the days of speed”. Well, he might not be blessed with Dickens’ gift for narrative, but the track is swooning and romantic (“She’s an aristo / I’m working-class”, this shameless social climber boasts).

He’s said he wanted ‘The Christmas Present’ to match his previous albums and, in fact, the original compositions are richer than the covers. The galloping ‘Darkest Night’ opens with the fabulous line “December in London / Think I’ve just been made redundant” and the optimistic ‘New Year’s Day’ borrows quite liberally from George Michael’s ‘Freedom’ on a jubilant bridge where Robbie and a gospel choir rapturously exclaim, “Oh! It’s an energy! Oh! The memories!”

There’s seductive nostalgia at work here, with Robbie evoking his carefree Britpop youth as he implores us to similarly look back misty eyed at the past. Elsewhere he winks through the deeply enjoyable ‘Snowflakes’, a raunchy honky-tonk on which he paints his family as a loveable “bunch of snowflakes” tiptoeing around the tricky talking points over dinner (“Mary-Lou tried to tell us why Trump is good for you / The table goes quiet because that’s what we do / We’re all just liberal snowflakes”).

The Fury collaboration ‘Bad Sharon’, a stomping glam rocker, is vaguely bizarre – though it would perhaps be unwise to criticise the boxer’s, erm, distinctive singing voice. So let’s focus on the covers, shall we?

Cullum crops up on a perfectly serviceable rendition of Slade’s timeless cracker ‘Merry Xmas Everybody’, Fischer purrs through ‘Santa Baby’ and Bryan Adams honks through Darlene Love’s untouchable 1963 classic ‘Christmas (Baby Please Come Home)’, which first appeared on the Phil Spector-helmed compilation ‘A Christmas Gift for You’. OK – it’s better than the Bublé version, but come on, lads: some things are sacred, and Darlene Love’s ‘Christmas (Baby Please Come Home)’ is one of them.

We’ve heard these songs so often it would have taken a Christmas miracle for even a pop legend of Robbie’s stature to make them new. Still, his longtime collaborator and co-producer Guy Chambers has brought a great deal of warmth to this collection – newbie ‘Time For A Change’ comes on like ‘Strong’ with bells and whistles on. You‘d be a real Scrooge to deny ‘The Christmas Present’.