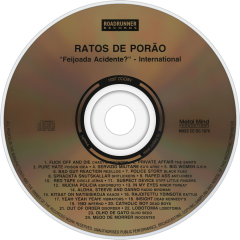 After the departure of Jabá, the band had several different bass players and recorded a studio album with only punk and hardcore covers called Feijoada Acidente?, a play on the Guns N' Roses album "The Spaghetti Incident?". (Feijoada is a traditional food from Brazil, a stew based on beans and pork.) There were two versions of this album: one covering only Brazilian bands such as Olho Seco, Lobotomia, Garotos Podres, among others; and one covering only non-Brazilian bands such as G.B.H., Black Flag, Anti-Cimex, Minor Threat, among others. At this time, Walter Bart (who used to play in a punk band called "Não Religião") and "Pica Pau" (Portuguese for woodpecker), who stayed in the band until 1999, played bass.