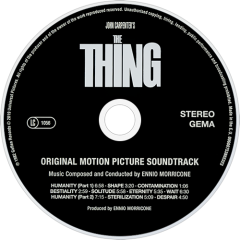 The original soundtrack was released by Varèse Sarabande in 1991 on compact disc. It was also available as an isolated score track on the 1998 DVD release, but is not present on the 2005 edition. The soundtrack has since gone out of print. A re-recording of the soundtrack, produced and arranged by Alan Howarth and Larry Hopkins, is currently available. It is the only version of the soundtrack that contains the unused Carpenter and Howarth pieces.