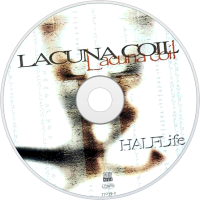 Halflife is an EP by the Italian rock band Lacuna Coil, released in 2000 by Century Media. The EP contains 5 tracks. A slightly altered version of the track Senzafine would later appear on international releases of their 2001 full-length album, Unleashed Memories, while the entire HALFLife EP was appended to the United States release of the album. A performance of Senzafine can also be found on the band's 2008 live album.