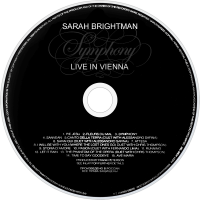 Symphony is the tenth studio album from the English Soprano singer Sarah Brightman, released in January 2008 (see 2008 in music). This classical crossover album is a contrast to her previous collaboration with producer Frank Peterson, 2003's Harem; using more Gothic influences instead of Eastern.

"Running" was the IAAF's Green Project Charity song, which Brightman performed at their 2007 Championships opening ceremonies in Ōsaka, Japan. An alternate version of "I Will Be with You", featuring Chris Thompson, was the theme song for the tenth Pokémon film: The Rise of Darkrai. The Spanish duet with Fernando Lima, "Pasión", the theme song for the period Mexican telenovela of the same name, was also a single. The London Symphony Orchestra and Brightman's younger sister Amelia Brightman also perform on the CD. It reached number 1 on the U.S. Billboard Top Classical Crossover Albums chart.
The album features a number of cover songs including, "Where the Lost Ones Go" (under the title "I Will Be with You"), originally by Norwegian singer Sissel Kyrkjebø and the song "Symphonie" (in its English form, "Symphony"), from which the album lends its name, originally by Silbermond. "Schwere Träume" is an adaptation of the fourth movement of Gustav Mahler's fifth symphony. "Sanvean" is a song originally by Lisa Gerrard with her group Dead Can Dance. The duet with Andrea Bocelli, "Canto della Terra", is again, like "Con te partirò", a cover/duet of one of Bocelli's songs, from his Sogno album. "Sarai Qui" is an Italian translation of Faith Hill's "There You'll Be". "Attesa" is adapted from the symphonic Intermezzo from Pietro Mascagni's Cavalleria Rusticana. The single version of "Running" also features a piece from "Jupiter", from Gustav Holst's The Planets.