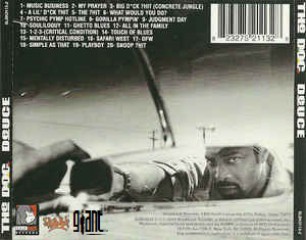 Deuce is the third studio album by West Coast Dallas rapper The D.O.C., and the second since the car accident which severely damaged his larynx. The only single released from Deuce was "The Shit", which features fellow former-N.W.A. members MC Ren and Ice Cube, along with Snoop Dogg and Six-Two.

The album was originally meant to be a Six-Two album, completely produced by Dr. Dre and released through Aftermath Entertainment. However, D.O.C. and Dre argued over whether D.O.C. should be rapping on the album. The D.O.C.'s presence on this album is minimal however, making an appearance to introduce tracks or perform in skits such as "My Prayer" and "Souliloquy". Deuce focuses primarily on showcasing other artists on D.O.C.'s Silverback Records label, including U.P.-T.I.G.H.T., El Dorado, and in particular, Six-Two.

The song "Simple as That" was released earlier in 2003 on DJ Greg Street's Six O'Clock Vol. 1 mixtape.