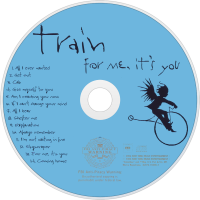 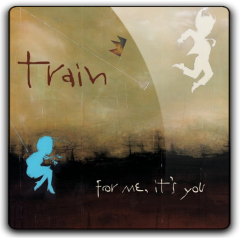 For Me, It's You is the fourth studio album by American band Train, released through Columbia Records on January 31, 2006. It was their last album recorded as a five-piece until 2014's Bulletproof Picasso and the only album to feature the second lineup. The album's first single, "Cab", was released to radio in November 2005. The second and third singles, "Give Myself to You" and "Am I Reaching You Now" were released in mid-2006.

The album was met with commercial disappointment. Despite debuting at number 10 on the US Billboard 200, it descended the chart quickly and is their first album not to have received an RIAA certification. It is also the band's only album to not feature a Billboard Hot 100-charting single.

User Album Review
Pretty good and perhaps even a little bit progressive for Train but still woefully underwhelming by any other measure of quality, For Me, It’s You is, in spite of all of the grand orchestral swells that bolster frontman Pat Monahan’s outsized emoting, a louder album than its predecessors, showing just a hint of fray at its sandblasted edges. For a band that’s built a career on aggressively middlebrow Adult Top 40, this means that much of the album, rather than trying to be even more anonymous than Lifehouse or 3 Doors Down, tries to out-U2 Coldplay. “Get Out” and “Am I Reaching You Now” strive for massive arena-rock grandeur, and, while Train is slick and professional enough a band to pull that off, what prevents the album from working even as marginally as X&Y and certainly not as well as The Constantines’ Tournament Of Hearts is the banality of the songs’ lyrics. While Monahan is the band’s principal songwriter, it’s telling that there’s not a writer’s credit to be found anywhere in the liner notes, so devoid are these songs of a distinctive voice. Lead single “Cab” fares worst, opening with the emetic “New York snow this time of year/There’s nothing more beautiful to me/Except for you,” which provides ample cannon fodder for those already dismissive of the band’s MOR sound and is a good long way from the deliberately ridiculous lines of “Meet Virginia” and “Drops Of Jupiter.” No one checks out Mozart while doing Tae-Bo on For Me, It’s You; in fact, no one does or says anything of lasting consequence. Disliking Train still seems mean: they’re a band that comes off as aware of their own irrelevance and are more resilient because of it. That a Grammy-winning, major label rock outfit can still position themselves as something of an underdog likely goes a long way toward explaining why Train moves more records than, say, The Calling, which is a trend that For Me, It’s You will likely continue.