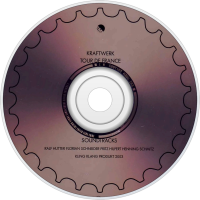 Tour de France Soundtracks is the tenth studio album by the German electronic group Kraftwerk, released in August 2003. In October 2009 it was re-released under the title, Tour de France. The album is not to be confused with their 1983 single of the same name, though the theme and cover artwork of both releases are nearly identical. The album was recorded for the 100th anniversary of the first Tour de France bicycle race, although it missed its original release date during the actual Tour. The announcement of the release caused much anticipation, as it had been 17 years since the group had put out a full album of new studio material since 1986's Electric Café (also known as Techno Pop)
Unusually for a Kraftwerk album it did not have separate German and international vocal mixes, but was released only in one version, with a mix of French, German and English. The lyrics were co-written by Ralf Hatter and Maxime Schmitt who had previously been manager of the Capitol label at Pathé-Marconi (part of the EMI group, the company that distributed Kraftwerk's music in France) and had been involved with the band since the mid-1970s.
It was recorded by the band in their Kling Klang studio, located in DÃ¼sseldorf, Germany; HÃ¼tter and Schneider working with Fritz Hilpert and Henning Schmitz. This four piece line-up then took the album on an extensive world tour in 2004. On the tour, they performed the music from four laptop computers running sequencing, sampling and synthesizer software, also controlling and synchronised with large video displays. In 2005, Kraftwerk released Minimum-Maximum, with separate audio and video releases featuring songs performed at various venues during the 2004 tour.
A short jingle was supplied to the television broadcaster Eurosport for use in their coverage of the 2003 Tour de France.
A newly remastered edition of the album was released by EMI Records, Mute Records and Astralwerks Records on CD and digital download in October/November 2009, with heavyweight vinyl editions released in November/December 2009.

Album Review
Apart from a few select live appearances (Creamfields, Paris etc.) and the somewhat forgettable single,''Expo 2000'', for Kraftwerk all has been quiet since 1991's The Mix. In music industry terms this gap was geological in scale. Whole new continents of electronic music formed, were eroded by critical storms and disappeared. Yet in Kraftwerk's universe time looked as if it had stopped. Members have left. Members have joined. The core duo of Ralf and Florian remained. They go cycling. They don't give interviews. Every day they turn up at their Kling Klang studio in Dusseldorf and work...on what? Well, at last we know.
Professing their love of the fusion of humans and technology, Kraftwerk took the analogy to its furthest limit with 1983's ''Tour De France''. Here the melding of man and machine in a relentless, repetitive quest for speed seemed to perfectly mirror the sounds that the teutonic technologists had been forging. Metronomic, minimal, clinical and yet possessed of a sweet harmonic beauty that allowed just a tasteful smidgeon of emotion; it seems as if, in the intervening period, the jungen from Dusseldorf, have become fixated to the point of almost obsessive reductionism.
Tour De France Soundtracks is exactly that: a series of musical concept pieces designed to reflect the ultimate European sporting celebration of muscle and titanium. Those expecting any kind of musical progress in the traditional sense will be shocked. This is an album that not only continues exactly where they left off, but almost wilfully refuses to throw anything new into the mix. Lord knows, with the ease with which any spotty teenager can rattle off a Kraftwerk pastiche in their bedrooms these days, it must have taken a huge amount of effort to make an album that sounds this retro. Or maybe the 12 years were spent buying cycling gear instead of new equipment.
Whatever; if you still regard Kraftwerk as the deities that gave the world some of the most delightful and seminal electronica ever (and I do) you will take this record to your hearts. While the initial three versions of the title track pall over 15 minutes, the rest of the album more than makes up for it. ''Vitamin'', ''Chrono'' and ''Aero Dynamik'' are all object lessons in how to construct robotic music with a soul. ''Regeneration'' is quite moving with its swathes of synth strings and ''Elektro Kardiogramm'' (dig the crazy modernist spelling, kids) with its cha-cha rhythm and rousing boys chorus may even be displaying a Germanic sense of humour.
It would be impossible for this album to ever have the same effect that, say, Trans Europe Express did in 1977. Yet who could deny that their hermetically sealed world is still alluring? It just no longer points the way to the future. Ralf, Florian, Fritz and Henning are still the masters of being, well...Kraftwerk.