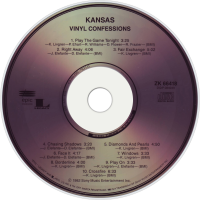 Vinyl Confessions is the eighth studio album by American rock band Kansas, released in 1982 (see 1982 in music). It includes "Play the Game Tonight", which broke the Top 20 and is Kansas's third highest-charting single, surpassed only by "Carry on Wayward Son" and "Dust in the Wind". The album was reissued in remastered format on CD in 2011.