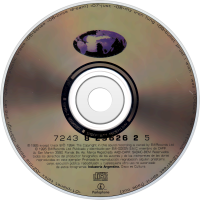 The Bends is the second studio album by the English alternative rock band Radiohead, released on 13 March 1995 by Parlophone. The Bends was produced by John Leckie at EMI's studios in London, and engineered by Nigel Godrich, who would go on to produce all future albums by the band. Featuring five charting singles, the album also marked the beginning of a shift in aesthetics and themes for the band, with greater use of keyboards, and more abrasive guitar tracks balancing subtler ones. The introspective grunge-influenced style of Pablo Honey evolved toward more multi-layered rock with cryptic lyrics and larger ideas, as the band and singer Thom Yorke reacted against the rigors of near-constant world tours. "Street Spirit (Fade Out)", the final single and last song on the album, became their first top five UK hit.

The album was subject to greater critical acclaim than their debut Pablo Honey (1993), receiving an enthusiastic critical reaction, and it reached number four in the UK Albums Chart. However, it failed to build on the commercial success of their single "Creep" outside the United Kingdom, and it peaked on the American charts at number 88. Although it lacked the instant success of later Radiohead albums, The Bends achieved triple platinum sales certifications in the UK and Canada and platinum sales in the United States and the European Union. In the years since its release, the album has frequently appeared in listener polls and critics' lists of best contemporary rock albums.

The Bends was ranked at #110 on Rolling Stone's The 500 Greatest Albums of All Time list.

Album Review
Thom Yorke and his band of merry men have taken the musical landscape and toyed, spliced and even at times mollycoddled it. Where most bands pick a path and stick to it, the Oxford five-piece have danced over and beyond various musical landscapes, carving out a unique hollow for others to marvel at. But before they achieved such a status, Radiohead had some establishing to do.

At a time when the main argument in the music industry was Blur vs. Oasis, Radiohead were following up their debut Pablo Honey with a more progressive move towards the largely unpopular art rock movement. The Bends sounded different. Why? It had subtle creativity at its core. Producer John Leckie, who also produced Pink Floyd, gave the band an unprecedented freedom of expression and the band had more than enough ability to take the ball and run...

The first track Planet Telex feels genuinely refreshing even thirteen years later. Further on, High and Dry and Fake Plastic Trees are simply acoustic treats ”“ stirring and poignant. Bones swiftly picks up the mood before Just blows most of the previous tracks out of the water, with the gain whacked up to ten and '90s guitar solos aplenty. Street Spirit (Fade Out), although notoriously downbeat contains one of the most recognizable guitar riffs in musical history. Accompany that with haunting harmonies and a string section and it all amounts to a stunning finish to the album.

Popular opinion places OK Computer as Radiohead's finest release to date, yet the The Bends was where they really put themselves firmly into the public consciousness. On the title track, Yorke sings, ''where do we go from here?'' like he didn’t have a plan”¦Luckily for us, he had a pretty good one.