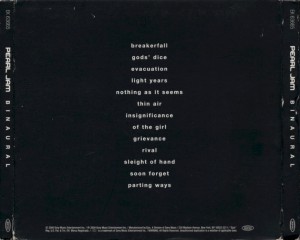 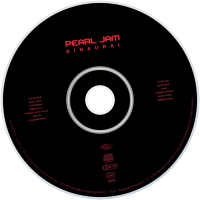 Binaural is the sixth studio album by the American alternative rock band Pearl Jam, released on May 16, 2000 through Epic Records. Following a full-scale tour in support of its previous album, Yield (1998), Pearl Jam took a short break before reconvening toward the end of 1999 to begin work on a new album. During the production of the album, the band encountered hindrances such as singer Eddie Vedder's writer's block, and guitarist Mike McCready entrance into rehabilitation due to an addiction to prescription drugs.
The music on the record featured an experimental sound, evident on songs that used binaural recording techniques. The atmospheric tracks, mostly featuring somber lyrics dealing with social criticism, lead the band to convey these themes with images of nebulas in the album artwork. Binaural received positive reviews, and debuted at number two on the Billboard 200. Although the record was certified gold by the RIAA, it became the first Pearl Jam studio album to fail to reach platinum status in the United States. The album's 2000 tour spawned a large collection of official bootleg releases.
Similar to the process for Yield, the band members worked on material individually before starting the recording sessions together. Lead vocalist Eddie Vedder called the making of the album "a construction job." Binaural was the first album since the band's debut that was not produced by Brendan O'Brien. Gossard stated that the band "felt like it was time to try something new," and that they "were ready for a change." Instead the band hired producer Tchad Blake, known for his use of binaural recording. Binaural recording techniques, which employ two microphones to create a 3-D stereophonic sound, were utilized on several tracks, such as the acoustic "Of the Girl." Regarding Blake, Gossard said, "He was just there for us the whole time, wanting us to create different moods." This was the first Pearl Jam studio album following the departure of drummer Jack Irons, and features drummer Matt Cameron of Soundgarden, who had previously drummed on Pearl Jam's U.S. Yield Tour.