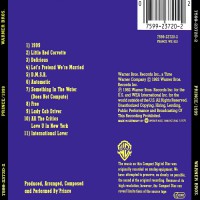 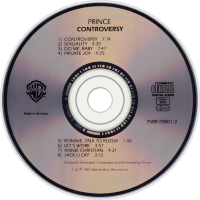 1999 is the fifth studio album by American recording artist Prince, released on October 27, 1982 by Warner Bros. Records. It was his first top ten album on the Billboard 200 chart in the United States (peaking at number 9) and became the fifth best-selling album of 1983. 1999 was Prince's breakthrough album, but his next album Purple Rain would become his most successful. The title track was a protest against nuclear proliferation and became his first top ten hit in countries outside the U.S.
It was also the first album to feature The Revolution. The band's moniker is written in reverse on the front cover.
According to the Rolling Stone Album Guide, "1999 may be Prince's most influential album: Its synth-and-drum machine-heavy arrangements codified the Minneapolis sound that loomed over mid-'80s R&B and pop, not to mention the next two decades' worth of electro, house, and techno." In 2003, the TV network VH1 placed 1999 49th in its list of the greatest albums of all time. The album was also part of Slant Magazine's list "The 50 Most Essential Pop Albums" and the magazine listed the album at #8 on its list of "Best Albums of the 1980s". The album was inducted into the Grammy Hall of Fame in 2008. In 2003, the album was ranked number 163 on Rolling Stone magazine's list of the 500 greatest albums of all time.

Album Review
Selling 5 million copies worldwide 1999 became the album that propelled Prince to fame, his cross-over album into a white audience, and remains today the favourite of hardcore fans. It is certified Platinum by the RIAA.

The album was written in the summer of 1982, and although Prince wrote all the songs, shown reverse lettering on the cover it is credited to his new backing band The Revolution – the first time his band had been given a name. 1999 was Prince’s first double album (the first five tracks on the first disk, with the remaining six on the second) and also is the Prince album to be pressed to CD: D.M.S.R.2 was omitted due to space constraint in early CD manufacturing technology but is reinstated in later pressings. 1999 is also Prince’s first album for which he employs the use of a drum machine. The album is universally acclaimed; Rolling Stone Magazine listing it 163rd in their top 500 albums of all time. The album originally peaked at number 30 in the US, however, climbed to the number 15 spot in the week following Prince’s death in 2016.